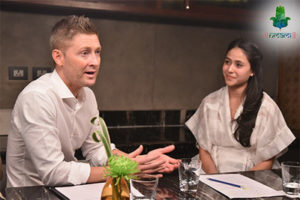 Michael Clarke appeared on a Facebook Live chat this week with prominent Indian celebrity nutritionist, Nmami Agarwal of Nmami Life. The subject of nutrition is a relatively recent one for professional cricketers. Not so many years ago, Mike Brearley is reputed to have asked the head of catering at Lord’s whether she could provide something ‘healthy’ for the England team during a test match. The response was along the lines of ‘Mr Brearley, you look after matters on the pitch and I will look after matters in the kitchen!’ How times have changed.

Not so many years ago, Sunday cricket gave the impression of being organised around pub opening times. Playing hours often fitted in between closing time at the end of lunch, and evening opening times. Perhaps licensing laws have changed, but for many amateur cricketers, the pre-match catering may not have done!

Michael Clarke has other ideas though and as one of the most successful cricketers of recent years, he probably knows a few things about being prepared for professional sport. Talking about the importance of good nutrition for an athlete, Clarke said:

It (the body) is like a car. If you put the best petrol inside your system, your car gets the best results.

He clearly knows a thing or two about petrol for cars! Although he does admit to liking Indian food – apparently naan bread is his favourite!

You can watch the video here: