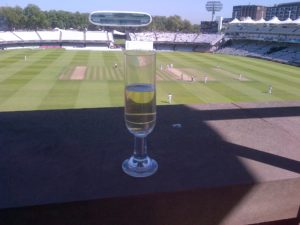 School cricket at Lord’s these days is best known for the Eton v. Harrow match. Historically though, it was one of many rivalries contested on the ‘hallowed turf’ of St John’s Wood. 2017 sees the return of Rugby v. Marlborough for the first time since 1972, part of the 450th anniversary celebrations for Rugby School.

We’re not in a position to comment on the current crop of players at each school, but there are certainly some notable cricketers of old associated with each school. Perhaps most notable is Sir Pelham Warner who managed the infamous ‘bodyline’ series of 1932-3. They are currently coached by former Warwickshire cricket and captain, Michael Powell.

On the Marlborough side, head coach Mark Alleyne M.B.E. should know Lord’s well, having previously been head coach at the Marylebone Cricket Club, hosts of the 2017 match at Lord’s.

Rugby school continue to wear their traditional duck-egg blue cricket shirts, a fact explained as follows by the school:

The Rugby School XI wear blue shirts on the field of play. To answer the question ‘why?’ it is probably easier to ask why all the other teams stopped wearing them. In the mid 1850’s most teams wore coloured shirts. The All England XI, founded in 1846, wore its famous ‘white shirt with pink spots’ as early as 1847 and all the public schools wore coloured shirts. They started to disappear over the last 20 years of the 19th century, but why Rugby didn’t follow the fashion is still a mystery….

The match is scheduled for Saturday 12th August and is sure to attract a good crowd of alumni from each school. May the best team win!